Dear friends, it seems like a joke but the fact is that we have already completed our five months’ stay in this new mission of Taiwan. Our sentiments are generally of gratitude to God, to our Superiors and the entire IMC, to our host Bishop Lee as well as the entire local church of Hsinchu Diocese, and of course to all of you our well wishers.

With the passing of time we are slowly coming to understand a few things that previously seemed like mysteries to us. Our eyes are beginning to open up slowly and we are beginning to crawl just like little babies in the early process of growth. At first all the people here seemed to look alike, the road signs seemed incomprehensible, strange food… and above all a mysterious language. Well the truth is that “Rome was not built in a day,” and so too are our first impressions to these realities; however, now at the close of the fifth month, we can afford a sigh of relief since many of these things are no longer “mysteries” but simply “different”.

One of our main objective during this first year (as enshrined in our Community Plan of Life) is the proper study of the local reality. This has not been so easy since we have the obvious stumbling block of the language. Nevertheless, we have made significant strides towards that direction to the extent that now we can manage to out something little. These are still very subjective analysis based on our first impressions and studies done so far. Much of it is about the reality of our local church as here below explained:

1. THE CATHOLIC CHURCH IN TAIWAN
Taiwan has been part of a territorial jurisdiction since 1514, when it was included in the Diocese of Funchal. As a missionary jurisdiction, there was some organized Catholic activity on the island. In 1576, the first Chinese diocese was established in Macau. This covered most of mainland China as well as Taiwan. From the 16th century through the 19th century, this diocese was divided several times. In chronological order, Taiwan belonged to the dioceses of Nanking (1660), Fukien (1696) and Amoy/Hsiamen (1883).

In 1913, the Apostolic Vicariate of the Island of Formosa (Taiwan) was established, being detached from the Diocese of Amoy. It was renamed Khaosung in 1949. In September 1951 the Papal Internuncio to China was expelled to Hong Kong. Since 1952, the Papal internuncio has been stationed in Taiwan (Republic of China). Also, the ROC ambassador to the Holy See has provided the only permanent diplomatic link between China and the Holy See. Attempts to move the Papal nuncio to Beijing has failed, as the Holy See has not accepted demands by the People’s Republic of China that it sever its diplomatic links with Taiwan.

Before the end of World War II the Catholic Church had a very minor presence in Taiwan based mainly in the south of the island and centred on Spanish Dominican priests who went there from the Philippines in the 1860s. The end of World War II and the following years saw a mass migration of religious communities from mainland China as Communist persecution began to take effect. As a result the Catholic Church has many Mandarin-speaking postwar mainland immigrants and is under-represented among the native Taiwanese.

3. OUR HOST DOICESE OF HSINCHU 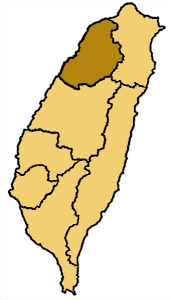 The seven Catholic Dioceses in Taiwan. Hsinchu Diocese is the one in dark colour

THE DOICESE OF HSINCHU – Leadership and general statistics:

4. MISSIONARY NEED
As you can see for yourself, this is a real mission land. Out of the whole population of 23 million people, only about 300,000 are Catholics. But the next question you will ask is about the faith of the rest of the population. Well just like in any many parts of Asia, (apart from the Philippines which is dominated by Catholicism) Buddhism and Taoism are apparently most dominant in the entire country; however there are also other traditional religions.

Taiwan is also currently experiencing a lot of economic stability and so has attracted lots of foreign immigrants in search of jobs. The majority of them are from the Philippines, Vietnam, Thailand and Cambodia. There are also a few from Latin America (especially those who came as students and ended up working here).

All the above have direct implications on the pastoral operation of the local church. In fact the pastoral work with the immigrants is basically one of the main occupations of the local church in quite a number of the dioceses in Taiwan at present. Your guess is as right as mine; meaning, we too can’t run away from this obvious branch of the ad gentes.

For this reason, as we celebrate our fifth month in this new mission, we also share with you that we have actively begun participating in the local church’s pastoral activities like the one mentioned above. Besides this we are also slowly venturing into the world of pastoral work with young people in the universities. In the coming months we shall share a little more on this last area of operation which, as you can imagine, is obviously one of our areas of pastoral operation as ad gentes.

Just as I mentioned earlier, this is limited to our first impressions and therefore appending any moral valuation or comparative analysis will be an exercise in futility. All we can say up to now is that we are basically students in every sense of the word. We are here to learn and let the Spirit of the Lord guide to fulfill God’s Will among his people in this part of the world. As usual, your prayers and support are highly appreciated.